After months of talks and trials, WhatsApp  has finally pulled the trigger on payments in its app. Today the Facebook-owned messaging service announced that users in Brazil would be the first to be able to send and receive money by way of its messaging app, using Facebook Pay, the payments service WhatsApp owner Facebook  launched last year.

WhatsApp says in its blog post that the payments service — which currently is free for consumers to use (that is, no commission fee taken) but businesses pay a 3.99% processing fee to receive payments — will work by way of a six-digit PIN or fingerprint to complete transactions.

You use it by linking up your WhatsApp account to your Visa or Mastercard credit or debit card, with initial local partners including Banco do Brasil, Nubank and Sicredi. Cielo, a payments processor, is also working with WhatsApp to complete transactions. “We have built an open model to welcome more partners in the future,” it noted.

The news comes as bit of a surprise. WhatsApp had been testing its payments service among users in India for months (that trial uses another system, not Facebook Pay but UPI), so many assumed that the world’s second largest internet market would be the debut region for the service.

But Facebook remains stuck in a regulatory maze in India that has prevented it from expanding the payments service beyond a small, limited launch, in what is otherwise the app’s biggest market in terms of users. India has 400 million monthly active users, while second-largest market Brazil has 120 million MAUs.

(And indeed, it would have an interesting position there because of that size: While there are a number of other digital payments services, including Google Pay and Paytm, there are no clear, large and popular competitors offering payments within a messaging app in the country.)

WhatsApp had been adopted informally for commercial purposes almost from the very start: Small business owners have used it to exchange messages with users around the sale of goods, what is in stock and so on. But under the wing of Facebook — which acquired the company in 2014 for $19 billion — WhatsApp started in earnest the big task of bringing in a more formal set of business services.

That’s included the launch of WhatsApp Business, which lets SMBs post catalogues and stock links within the app; advertisers on Facebook also can create links through to their WhatsApp accounts.

But now with payments, WhatsApp, which has amassed over 2 billion users, is finally taking a more comprehensive commercial plunge, giving people not just a place to chat about a product, or even send payment details, but now to actually transact.

And that, in turn, gives WhatsApp and Facebook another shot at building a revenue stream based on its vast scale, one which does not turn the app over to monetising its users through ads and the data that is amassed around them — the primary business model today behind Facebook and Instagram, another major app in the Facebook stable.

“Payments on WhatsApp are beginning to roll out to people across Brazil beginning today and we look forward to bringing it to everyone as we go forward,” the company said.

Users in Brazil will be able to use the payments service on WhatsApp to make purchases from local businesses without leaving their chat, the Facebook-owned service said.

“The over 10 million small and micro businesses are the heartbeat of Brazil’s communities. It’s become second nature to send a zap to a business to get questions answered. Now in addition to viewing a store’s catalog, customers will be able to send payments for products as well,” the company wrote in a blog post.

Although WhatsApp has in theory been working on payments for years; from what we understand, there were a lot of delays in part due to how and where Facebook wanted WhatsApp to implement it. Now that it’s launching with Facebook Pay, it seems that we know how that struggle landed.

As for subsequent regions for launching the service, it’s not clear whether Facebook will be open to working with other kinds of payment methods, or even other payment rails beyond Facebook Pay, or what kinds of use cases it will pursue for the service — although the trial in India, using UPI, implies that it won’t just be a one-size-fits-all approach.

These remain critical questions, considering that payment cards and even bank accounts are not necessarily the norm in every market, especially emerging markets; and that other kinds of transactions such as remittances — where people transfer money to friends, family and businesses that are often far away — are some of the more popular uses of phones beyond simple calls and texts. (And as we’ve been saying for years, the link between messaging and remittances is a big one: messaging apps are where people carry out their relationships and communication, so they are a natural place to stay to send money.) The examples of payments in Brazil indicate that remittances are very much on Facebook’s radar, so we’ll see how and where it actually gets used. 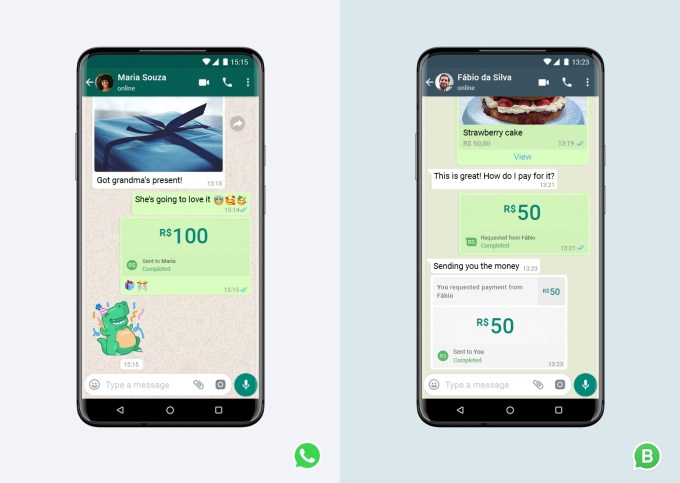 A WhatsApp spokesperson declined to say more when asked for more specific details about future plans beyond Facebook CEO Mark Zuckerberg’s “More to come soon!”, from his own announcement. But given the link with Facebook Pay, one obvious guess might be that we’ll see payments rolled out in WhatsApp in markets where the former service is now live, which include the U.S. and U.K.

“We’re continuing to roll out Facebook Pay on Facebook to more countries outside the U.S. for existing payment experiences, which vary by country and may include experiences such as in-game purchases and fundraisers where already available,” a Facebook spokesperson said. “As we’ve said previously, our goal is to bring Facebook Pay to more people and places over time.”
Source: https://tcrn.ch/3d8c8bE
admin2022-12-02T14:44:16+05:00
Page load link
Go to Top